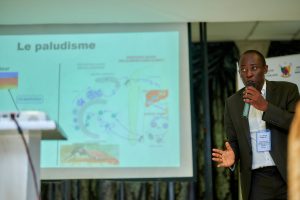 Impact Santé Afrique is pleased to welcome Dr Antonio Nkondjio Christophe to the #LaMinutePalu column. He is a researcher and medical entomologist. With him today, we are discussing the vectors responsible for malaria transmission.

Impact Santé Afrique: Hello Doctor! It is a pleasure to welcome you in this column. Can you tell us more about yourself?

OCEAC is an Organization for coordinating the fight against endemic diseases in Central Africa created in 1963 in Yaounde – Cameroon. Our mission is to coordinate health policies and actions in the sub-region, conduct applied research, train personnel from member countries, promote health, and support countries in case of health emergencies or disasters.

Impact Santé Afrique: Apart from Anopheles in the case of malaria that you just mentioned, what are the other diseases that can be transmitted by mosquito bites?

Dr Antonio Nkondjio: There is Dengue and Chikungunya which are diseases transmitted by Aedes mosquitoes. These mosquitoes bite you during the day in parks or in the forest. If they are infected, they can transmit these two diseases and others such as yellow fever. There is also filariasis, which is transmitted by other species of mosquitoes called Culex, which is very present in urban areas. These are the mosquitoes that sing in your ears at night when you sleep.

Impact Santé Afrique: Tell us more about your research.

Dr Antonio Nkondjio: We are conducting research in different areas in Cameroon, mainly on the tools put in place by the Ministry of Public Health to fight malaria.

For example, we are measuring the effectiveness of impregnated mosquito nets and the resistance of mosquitoes in order to make recommendations to the Ministry of Public Health. At the same time, we are developing anti-larvae projects, as we did recently in Yaounde, to combat the proliferation of larval breeding sites due to insalubrity. We want to see if the combination of these two methods (use of impregnated mosquito nets and larvae control) will strengthen the fight against malaria.

Impact Santé Afrique: With the National Malaria Control Program (NMCP) of Cameroon, you have carried out a very instructive study on larvae breeding sites. What can we learn from it?

Dr. Antonio Nkondjio: It would be interesting to note that malaria control can be carried out in different ways: either by directly attacking the adult mosquitoes, in which case we have the choice of using impregnated mosquito nets or spraying in the houses; but we can also attack the mosquitoes in their larval state when they are found in water pools around houses, thus avoiding the emergence of adult larvae. This is called larval control.

With the MNCP, we have treated stagnant water pools in the city of Yaounde with a biological larvicide, Bacille Stirugien 6. The particularity of this bacillus recommended by the World Health Organization is that it selectively eliminates mosquito larvae, but spares other species. We were thus able to significantly reduce the density of mosquitoes around homes and consequently the transmission of malaria to humans.

These results are very interesting and show that we should continue to evaluate this tool so that the Ministry of Public Health can achieve the goal of malaria eradication in Cameroon.

You can easily recognize mosquito larvae in water pools.

Impact Santé Afrique: Is the effect of the anti-larvae treatment definitive on a water pool?

Dr Antonio Nkondjio: I would like to say here that the effect when treating water is not definitive – this is the weak point of this strategy which requires regular treatment of the breeding grounds in order to control mosquitoes and reduce their density. However, this treatment is important because mosquitoes are becoming increasingly resistant to insecticides.

To raise awareness, we sometimes organize meetings to explain what malaria is and to show households, for example, how to identify mosquito larvae in a pool of water.

Impact Santé Afrique: You raise a very important point, Doctor. How does one recognize water pools that contain mosquito larvae?

Dr Antonio Nkondjio: If you are shown them beforehand, it is easy to recognize them afterwards. People can easily observe mosquito larvae in water pools; they are organisms that you will see floating in the water, rising and falling. It is therefore recommended to clean and weed around homes, remove cans containing water, and clean gutters. This will keep mosquitoes and malaria at bay.

Impact Santé Afrique: Thank you Doctor for all these explanations. Do you have a message for the actors of the fight against malaria?

Dr. Antonio Nkondjio: Yes, I would like to say that together we can eliminate malaria. I am convinced that if communities, civil society, researchers, health authorities and development partners work in synergy, malaria will be eradicated in the near future.