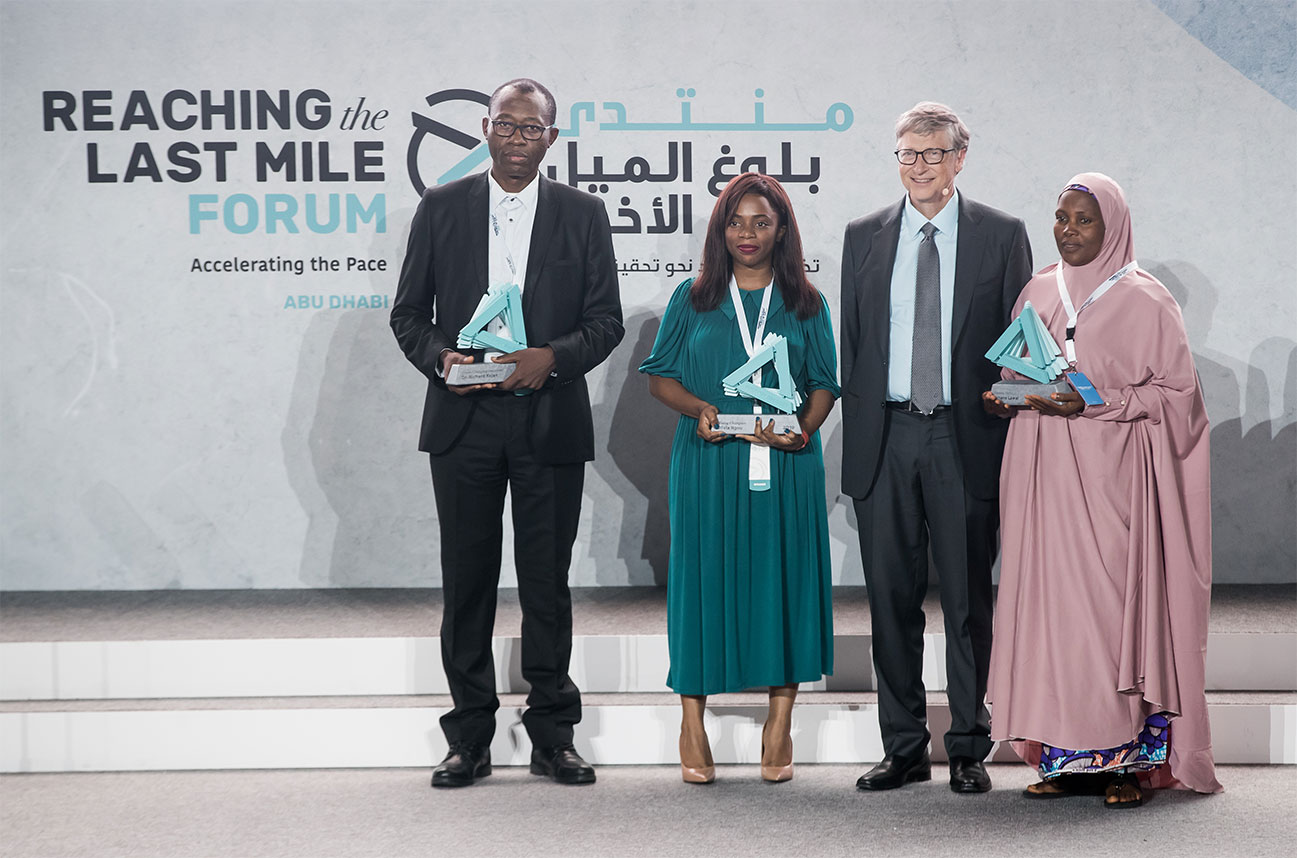 Olivia Ngou, Rahane Lawal and Richard Kojan are the three healthcare workers who received the REACH AWARDS (Recognizing Excellence Around Champions of Health) at the Reaching the Last Mile Forum organized by the Bill & Melinda Gates Foundation and the Crown Prince of Abu Dhabi on November 19, 2019. Working respectively to combat malaria, polio and Ebola, they were recognized for their bravery. 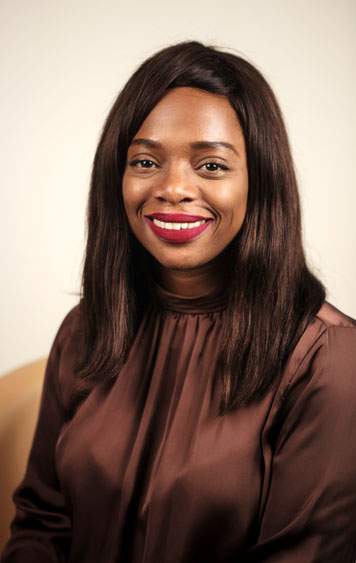 « I believe that malaria elimination will only be possible if local communities and Civil Society are fully and meaningfully engaged, as they are the ones on the front line and are present in areas that health systems cannot reach. Working with them will not only save lives but also ensure Universal Health Coverage (UHC) for communities at risk ».

Olivia Ngou is a specialist in advocacy to end malaria in her home country Cameroon and around the world. Skilled and passionate, her advocacy efforts involve engaging a wide range of stakeholders, from students to parliamentarians, to raise awareness of the importance of their role in eliminating malaria and to motivate them to act.

Currently, she is the Global Coordinator of Civil Society for Malaria Elimination (CS4ME), a global network of Civil Society Organizations that advocates for communities to be at the center of efforts to eliminate malaria. Although it’s still in beginning, CS4ME is an effective platform for community engagement and training.

Olivia is also a member of the Communities Delegation to the Global Fund Board and has previously worked as the Africa Deputy Programs and Cameroon Country Director for Malaria No More for 10 years.

Olivia’s efforts for increasing political commitment and national resources for malaria control have contributed to Cameroon national budget raising for malaria over the years. At the age of 34, Olivia is frequently solicited by the Cameroon’s Government to participate in technical working groups to advance universal health policies and national strategic plans to sustainably control malaria and other health problems. Today she provides technical assistance to other countries in Africa in malaria programmes. 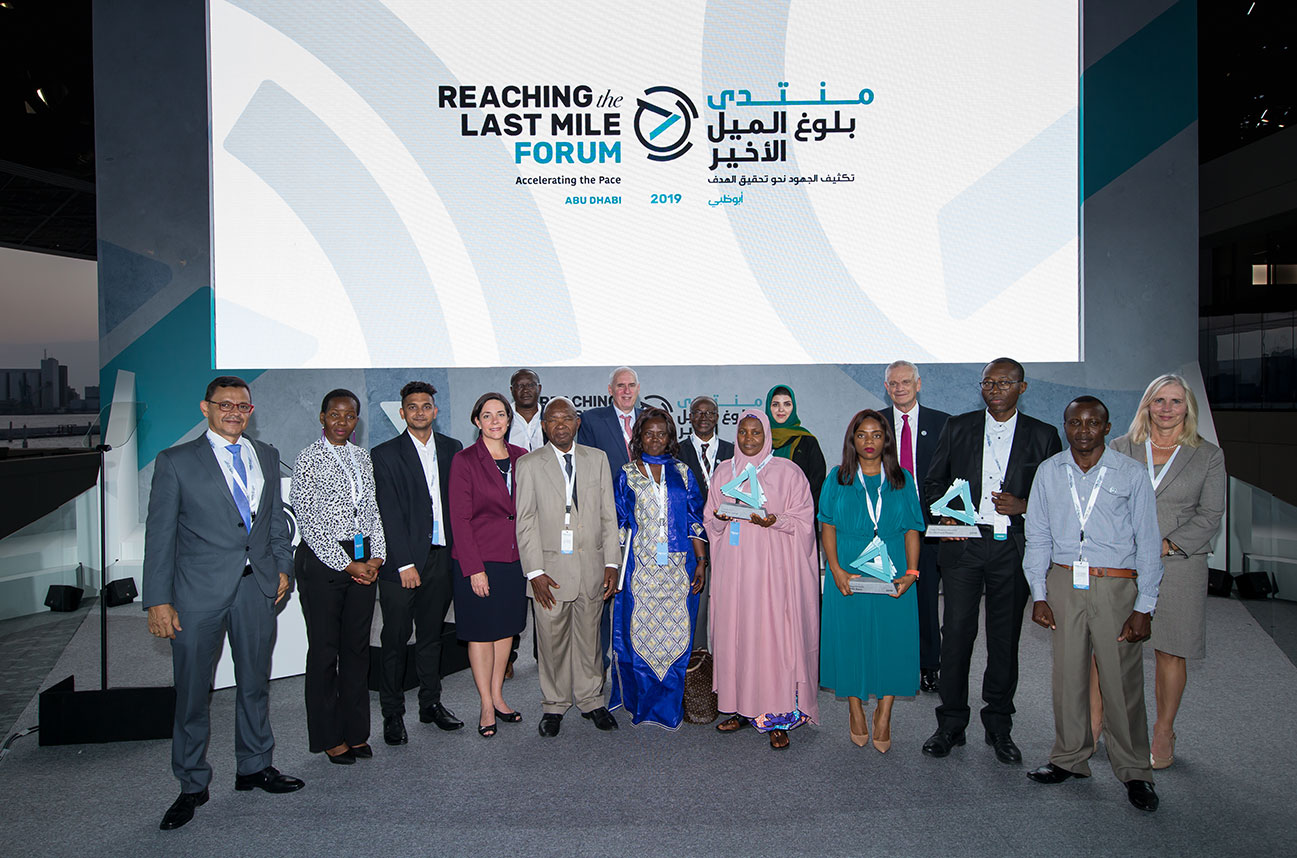 Below is an abstract of the article

“Reaching the Last Mile: Kidnapped Unicef worker whose stepfather was murdered in front of her is honored” 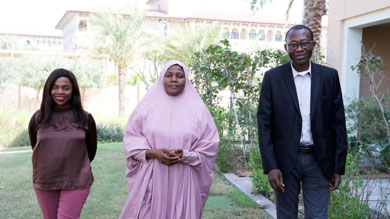 Three healthcare workers on the front lines of the world’s disease epidemics have been recognised for their commitment and bravery.

The trio was recipient of the Reach awards at the Reaching the Last Mile forum at Louvre Abu Dhabi on Tuesday.

Rahane Lawal, Richard Kojan and Olivia Ngou worked to tackle polio, Ebola and malaria, respectively – among the debilitating diseases the forum was set up to tackle by raising funds for research.

Ms Lawal, from Nigeria, saw her stepfather shot in front of her and was held hostage by bandits until her family paid a ransom, while Dr Kojan built special containment units to allow medics to safely treat Ebola patients at the height of the outbreak in the Congo.

When Olivia Ngou graduated from university in New York with a public health degree, she knew what she wanted to achieve.

While growing up in Cameroon she had malaria several times, including a serious case when she was a young girl.

So after working on combating the disease as a UN intern, she co-founded the Civil Society for Malaria Elimination, an NGO, in her home country. It brings together politicians, celebrities, charities, the media and others to focus on eliminating malaria. 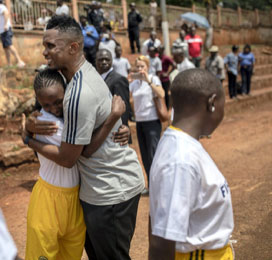 Former Barcelona and Cameroon star Samuel Eto’o hugs a child during a visit to a Cameroonian school in March 2019. He had malaria as a child and lost friends to the disease – now he campaigns to raise vaccine awareness. Maja Hitij – Fifa / Getty

The organisation, which she leads, has help persuade to Cameroon government to increase funding for fight malaria.

“I realised it was possible to end the disease in this generation so I focused all of my work for the past 10 years on malaria advocacy,” Ms Ngou, 34, said.

One particular episode stands out in Ms Ngou’s mind – when she had a severe bout of malaria at age eight.

“Each person has a different reaction to that – for me it was hearing,” she said.

“It is a disease that is so common, people have it so many times, that there is a need to reinforce the message around the danger. It is the oldest and deadliest disease in human history”

“I would hear your voice 10,000 times louder [than usual] and I would tell everyone ‘stop screaming, stop screaming’ and nobody was screaming.”

She recovered, because her parents were able to pay for treatment, and she knows she is one of the lucky ones.

“It was a bizarre experience and everyone has a different experience,” she said.

“Unfortunately some people have a cerebral malaria and the damage is awful, and some people are also crippled, so it depends on how your body would react.”

Among the celebrities she has enlisted to help raise awareness are Didier Drogba and Samuel Eto’o, the footballers, Lady Ponce and Youssou N’Dour, the singers, while Richard Bona, the Cameroonian bassist, helped create an anti-malaria anthem.

“It was actually easy to get them to help because every single celebrity that had lived in Africa had malaria or knows someone who had malaria,” she said.

“For example, Samuel Eto’o has said ‘if I didn’t have treatment I wouldn’t be here – I wouldn’t have become one of the greatest players in the world.”

She remains concerned, however, that malaria is not being taken as seriously as conditions such as Ebola and HIV, despite it being responsible for far more deaths.

“One of our biggest challenges is to actually make people understand the real danger of malaria because it is a disease that is so common – people have it so many times – that there is a need to reinforce the message around the danger,” she said. “It is the oldest and deadliest disease in human history.”

Despite progress in Cameroon, there are still between 2,000 and 3,000 documented deaths from malaria per year, and the true total is likely to be higher. Ms Ngou is also concerned about growing resistance to treatments to malaria in South East Asia, as mosquitoes evolve. If this is repeated in Africa, it could be the “worst public health problem that we have seen,” she said, and makes tackling malaria even more urgent.

But funding in some countries has “stalled”, she said, as issues like global warming and security challenges suck up cash and attention.

“We don’t have time [because of] this resistance issue,” she said. “We have to make sure that we can quickly invest. We know if you invest in malaria you will see the result quickly, like we saw in the last 15 years.

“Malaria has been here for so long, do people even believe [it is possible] to eradicate it? They have to believe it is possible.”